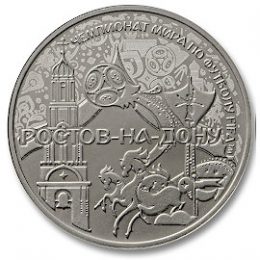 Attention! The Rostov-on-Don medal is sold only in full with the collected Collector’s Official Album.

Attention! The Rostov-on-Don medal is sold only in full with the collected Collector’s Official Album.

The city of Rostov-on-Don, one of the 11 cities hosting the 2018 FIFA World Cup in Russia, is presented at the commemorative medal.
You can collect the entire collection from 11 cities, 32 countries participating in the championship, the talismans of the World Cup and the symbolism of FIFA.
Medals can be stored both in a beautiful package, and buy a collector’s album, in which you can collect all the medals in one place.

Those who wish can get both the whole series of medals and each medal separately.
Polygraphic packaging allows you to store and collect medals without removing them from the blister.
Also, football commemorative medals can be extracted from the printing package and placed in the corresponding jacks of the Collector’s Album.