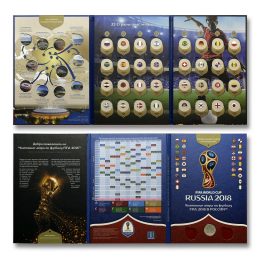 The Moscow Mint
The collected official album of the collector of the World Cup 2018 — 46 medals, 33 mm

In the official album of the collector released to the FIFA 2018 World Cup, all commemorative medals from Neusilber were already collected.
Neusilber is a «new silver», an alloy of copper with 5-35% of nickel and 13-45% of zinc.
The collection of coins already collected.

For collectors, the following commemorative medals will be available: f 33 mm:

11 cities hosting the 2018 World Cup;
32 countries participating in the championship;
3 variations of the Talisman of the Volchonka Zabivaki Championship (1 black and white and 2 color);
Official FIFA symbols.