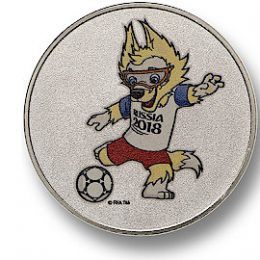 Commemorative medal of the series «Mascot of the FIFA World Cup 2018» in the printing package — «Zabivaka» (Color image, view number 1)

This commemorative medal of the series dedicated to the mascot of the World Cup FIFA 2018 cub Zabivake, on the occasion of the event will be released a few kinds of models with a talisman.

You can collect the entire collection from 11 cities, 32 countries participating in the championship, the talismans of the World Cup and the symbolism of FIFA.

Medals can be stored both in a beautiful package, and buy a collector’s album, in which you can collect all the medals in one place.